What a difference a year makes.  Last year around this time we were writing to calm nerves about the stock market’s worst 4, no 6, no 10 day start to a new year in history.  You may remember the headlines:

“It really is the stock market’s worst. year. ever.” – Matthew Phillip, Quartz

“The stock market is having the nightmare start to 2016 and it’s all the Fed’s fault.” – Miles Udland, Business Insider

Which brings us to present day.  The Dow Jones Industrial Average (Dow) earlier this week reached and surpassed 20,000.  This should be exciting, right? Eh, not so much.  While the Dow hitting 20,000 sounds and feels good, it really has no fundamental importance to long term investors such as you and us – but would certainly be more interesting to the technical and short term traders.  Since World War II, the Dow has returned on average about 9% annually and it will likely continue to mark new highs as time passes.  Assuming just a 7.5% average return for the Dow over the next 10 years puts the index right around 40,000 by 2027.

At the risk of being a Debbie Downer, arriving at this “milestone” is a great time to pause and remind everyone that at some point the markets will fall and when they do, that it is okay.  It’s a natural course of action for stock prices and should be expected.  Even when the market experiences an intra-year decline there is usually a good chance it will end the year in positive territory.  The chart below published by JP Morgan illustrates the point – so does 2016. 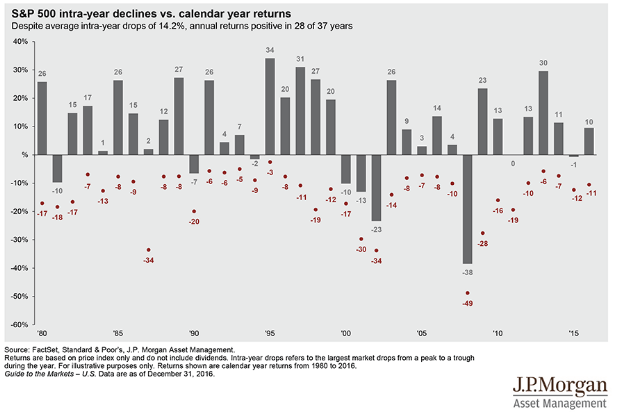 So what should you do to prepare for the inevitable declines?  Nothing, except to remind yourself that markets go up, markets go down, generally they trend up overtime and regardless of the direction, any investment decisions you make should be done so with your financial plan as the key driver – not emotions.  Just as we caution not to panic and sell out of the market (as we did in early 2016), now would not be the time to allocate more dollars to stocks for the fear (or greed) of missing out.

Consider this a lifeboat drill.  The seas have been calm and friendly but at some point the waters will get rough.  And when they do, don’t worry, now you’ll be prepared to stay the course and arrive at your destination safely.