The Merriam-Webster dictionary defines illusion as “something that deceives or misleads intellectually”. Illusions take advantage of our natural reactions by making us see things that don’t exist. For example, take a look at the image below. Are the diagonal lines parallel? 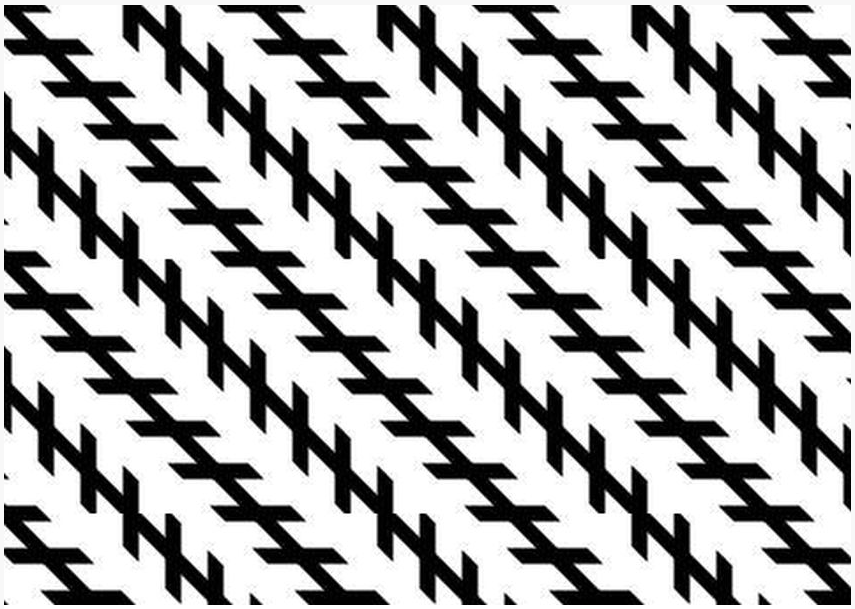 Of course they are! (Go ahead, check for yourself) The angle of the short lines helps to create the impression that one end of the longer lines is nearer to us than the other end.

How about the picture below? Can you see the straight horizontal lines or do they look bent? 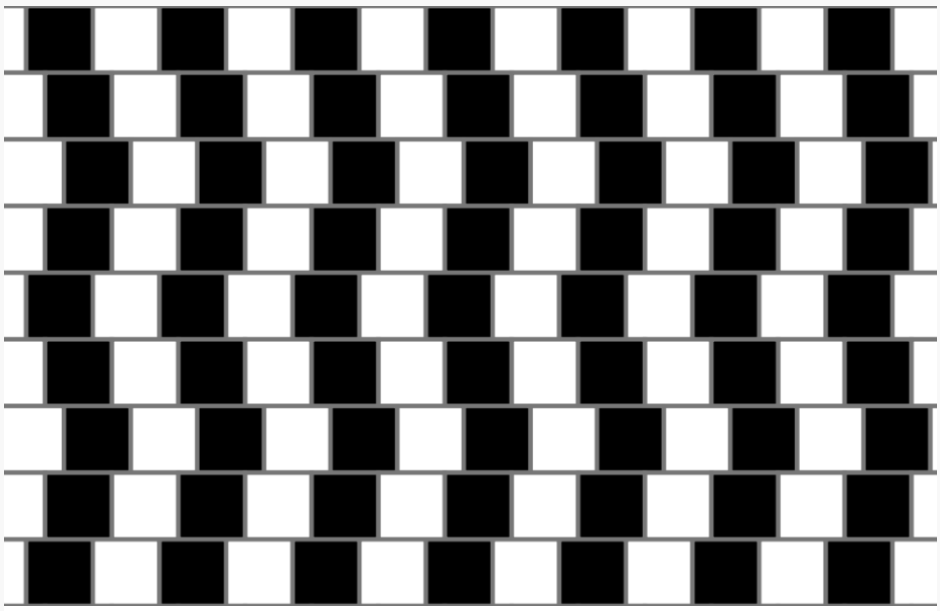 I had to use a ruler too, but the lines are, indeed, straight. What - you might be asking yourself - do optical illusions have to do with investing? The answer lies in our perception of risk and the market’s ability to take advantage of our natural reactions.

Too often, investors perceive volatility to be synonymous with risk and, therefore, something that must be feared and avoided. Short-term volatility – as depicted in the chart below – is an enduring characteristic of investing. 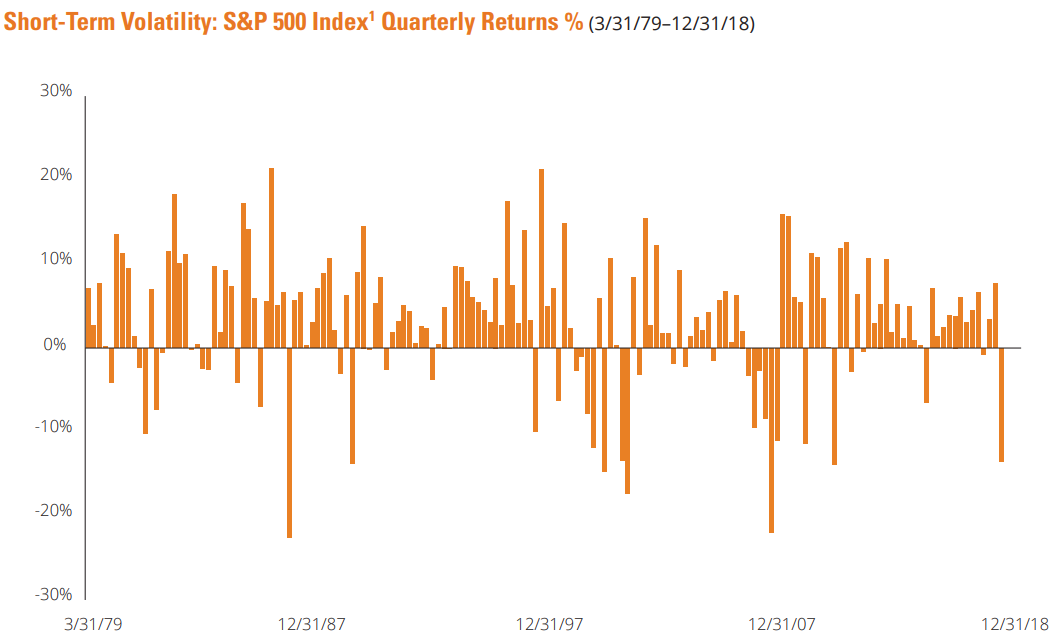 Looking at the chart above would lead anyone to believe that the market is risky – gyrating between double digit positive and negative quarterly returns in just the back half of 2018 alone. These swings cause many investors to see short-term volatility as having a great effect on their long-term investment portfolio, when the opposite is historically the case. In fact, viewed through another lens (below), those short-term market movements appear quite differently. 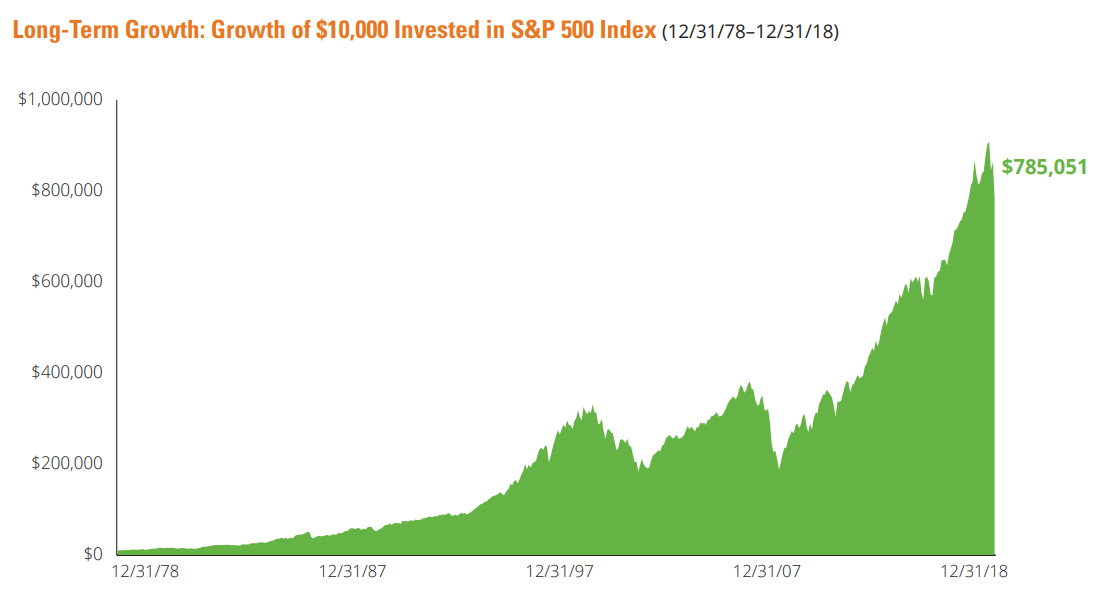 The above chart represents nearly the same period -- with all the short-term volatility included - yet viewed with a long term perspective. In this view, volatility appears rather subdued; almost inconsequential along the path to growing your wealth. Just like the straight line that appears bent, or the parallel line that appears crooked, short-term volatility makes an investor fear risk when, just maybe, it’s not as scary as it feels.

What if the real risk isn’t short-term volatility but, instead, inflation risk – the risk that your dollar buys less tomorrow than it does today? Take someone who is “risk-averse” leading them to shun equities in favor of “safer” investments such as cash or CDs. They’ve now traded the perceived risk of short-term volatility for the real, long-term risk of reduced buying power as the growth in “safe investments” failed to keep pace. Those assets they’ve saved and protected will no longer purchase what they once did as the damaging effects of inflation compound over time. Yes, their savings were safe but they must now adjust their lifestyle to consume less.

Coupled with inflation risk, the greatest risk may actually be longevity risk – the risk of outliving your resources and not having enough money to last through retirement. Is focusing on short-term volatility creating an illusion that will result in the cruel reality of outlasting your money?

At some point, most of us need to take risk. The question is: Do you want your risk now or later? If you want your risk now, you’ll need to see short-term volatility as opportunity; keeping the illusion of permanent loss from leading you to bad investment decisions. The other option is to take risk later – the risk of outlasting your resources – at a point in your life when your options are limited.

A well-executed plan, along with another set of eyes to see through the illusions of the market, will ultimately allow an investor to account for all risks on the road to a successful financial future.