With domestic and international terrorism, wild market swings, and threatening interest rate hikes, it's natural for everyone to be nervous and question their investment approach. But reminding yourself that you are an investor and not a speculator will help.

According to investopedia, "the main difference between speculating and investing is the amount of of risk undertaken in the trade. Typically, high-risk trades that are almost akin to gambling fall under the umbrella of speculation, whereas lower-risk investments based on fundamentals and analysis fall into the category of investing. Investors seek to generate a satisfactory return on their capital by taking on an average or below-average amount of risk. On the other hand, speculators are seeking to make abnormally high returns from bets that can go one way or the other. It should be noted that speculation is not exactly like gambling because speculators do try to make an educated decision on the direction of the trade, but the risk inherent in the trade tends to be significantly above average."

We want our clients to be investors and NOT speculators. Investors are successful because they...

The chart below represents the percentage of positive vs. negative returns based on different time periods for the S&P 500 from 1926-2015. 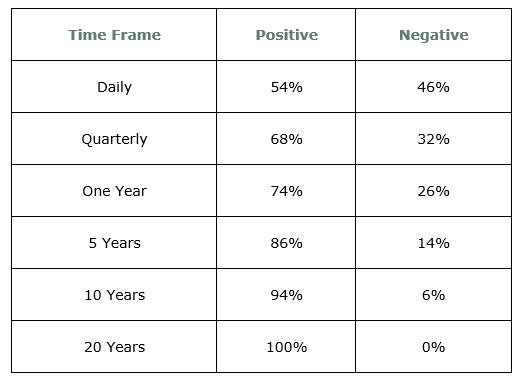 We find speculators find the answer they want. Take the internet as an example, you can Google the outlook of any investment and find positive or negative support. It just depends on what you want to read. Investors on the other hand are optimistic about the future because they remind themselves how far we have come. Below is helpful information looking back on the last 40 years.

Gorbachev comes to power in the Soviet Union, and meets with President Reagan. The Internet domain name system is created. Windows 1.0 is published, and the first successful human heart transplant takes place. The song of the year is “We Are the World.” In the greatest marketing catastrophe since the Edsel, the Coca-Cola Company introduces New Coke. A first class U.S. postage stamp costs twenty-two cents.

A radical Islamic faction, ISIS, casts the Middle East into chaos, and carries out terrorist atrocities in Paris and elsewhere. Refugees pour into Europe. The world's leading nations reach an accord with Iran on its nuclear development program. Yogi Berra dies. A postage stamp costs forty-nine cents.

We always have and always will face challenges. Investors know this but more importantly have confidence we'll come out on top.