As I write this post on Friday, September 2nd, the stock market – which has been down all week – is up around 1% on the day. What can we attribute the up day to? That’s right, bad news on the employment front!

Fewer jobs were added, and the unemployment rate rose. One might think both of those data points are bad news for the economy and, in turn, the stock market, but that’s not how the market works in the short term. In this case, the less favorable employment news meant – to the market at least – that the Fed might be less aggressive in its rate hikes which may be good for the markets in the short term.

This is just the most recent example of why, over short periods of time, the market is impossible to predict. The chart below from JPMorgan highlights that short term risk by showing the wide variations in returns – between positive 47% and negative 39% - over a 1-year period in the S&P 500 dating back to 1950. If you look out further though, those short-term swings smooth out and the range of returns is a lot more favorable – and less risky – as your holding period increases. 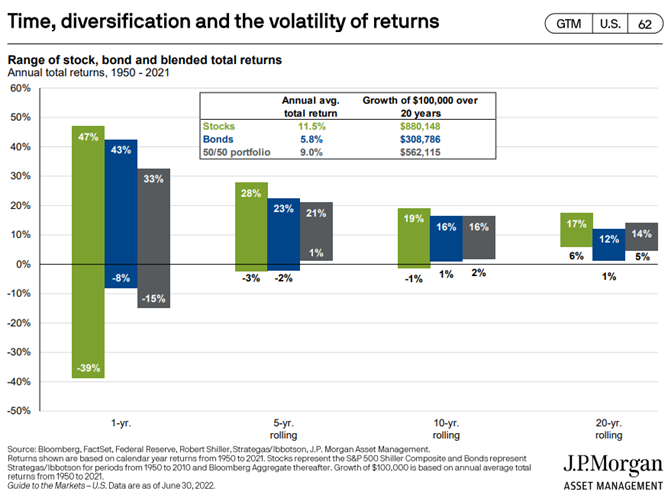 As long-term investors, we’re rewarded for weathering the inevitable storms along the way. The storms eventually pass though sometimes those clouds move slower than we’d like.